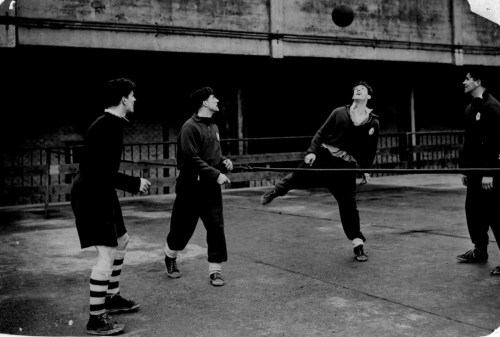 “Arsenal Players Train for cup-tie. March 4th 1952.
Arsenal players in a game of ‘header tennis’ at Arsenal Stadium, Highbury, London, as they train to-day (Tuesday) for next Saturday’s sixth round F.A. Cup tie against Luton. Left to right are Lishman, inside-left; Swindin, goalkeeper; and Daniel, centre-half.”

“Arsenal Players Report for Training July 27th 1954.
A few words of wisdom from Arsenal Football Club manager Tom Whittaker (front, left) as he welcomes the players outside their Highbury ground today (Tuesday) at the start of their first training perios for the coming season. The footballers are changed ready for a session of road work.”

Today I’ve scanned some press photo’s from the match. As always the details below the photo’s are taken from the backslips. Although they have no slips the last four photo’s are stills produced by British paramount of the build up to the first goal.

Finally, an absolutely delightful Movietone clip of the game. 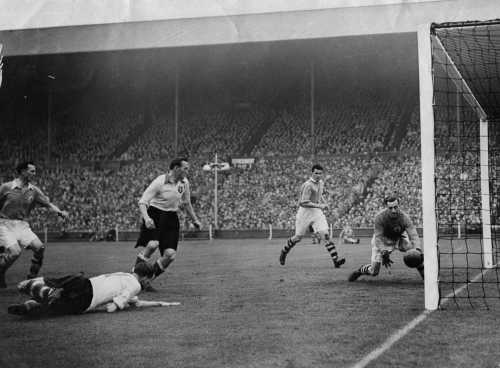 “Goalline save by Swindin in Cup Final.
Swindin, Arsenal goalkeeper, makes a save on the goalline from a shot by Payne, Loverpool outside-right during the Football Association Cup Final at Empire Stadium, Wembley, to-day (Saturday).
April 29th 1950”

“Prelude to goal. Sidlow, the Liverpool goalie comes out to punch away, leaving his net unguarded, while Arsenal attackers and liverpool all jump up to the ball. A split second after this The Gunners scored the opener, at the Wembley Cup Final today.
April 29 1950.”

“Mercer reaches heights with F.A.Cup.
Climax to the season in which he was voted Footballer of the Year, Arsenal captain Joe Mercer holds the Football Association Cup he has just received from the King as he is chaired by his team mates at Empire Stadium, Wembley to-day (Saturday).
Arsenal had defeated Liverpool by two goals to nil in the F.A. Cup Final.
April 29th 1950.”

Last of the series of random 1930s scans.

I should mention that Eddie Hapgood is not holding a skipping rope on the first photo. I can only imagine there was a scratch to the negative before the photo was printed.

As for the other two I wanted to finish this part with a couple of individual photo’s of the biggest stars of our 1930s team. Obviously such a thing is very arguable but I’m quite happy with my choice of Alex James and Eddie Hapgood.

As always anything written below the scans are from the backslip. 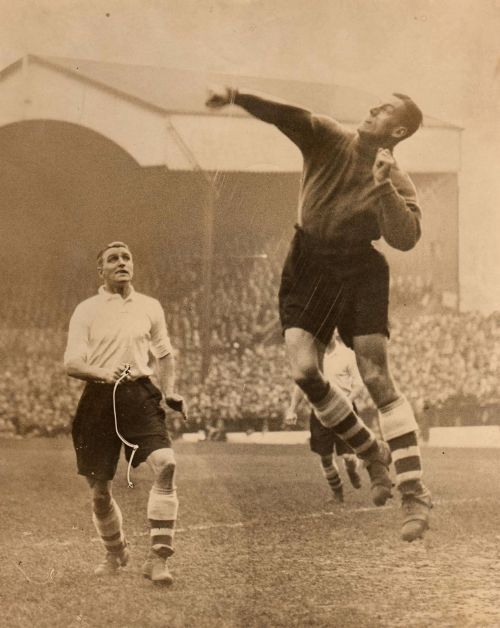 “1936-37 Charlton Athletic (0) versus Arsenal (2).
At The Valley (Charlton).
Swindin (Arsenal Goalie) punches clear a shot from Prior (Chalton Centre-Forward) with Hapgood (Arsenal Left-Back) Looking on.
October 17, 1936.”