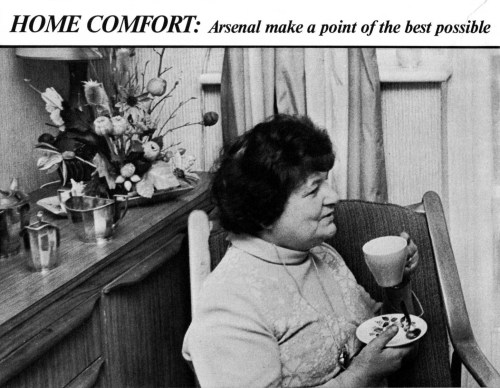 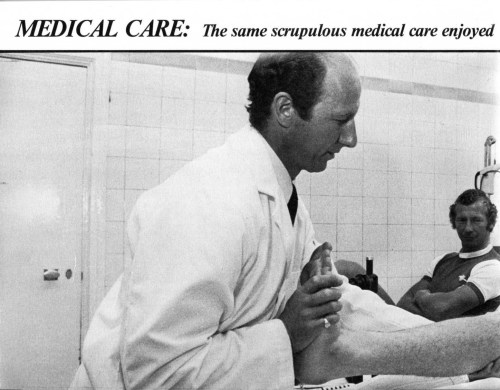 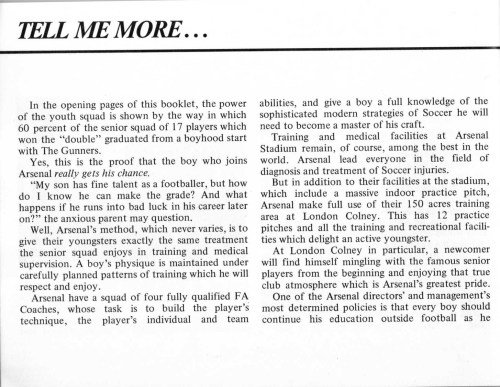 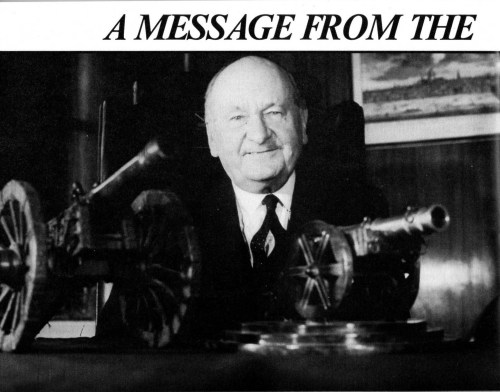 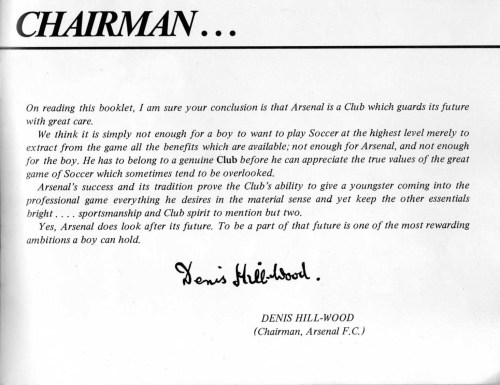 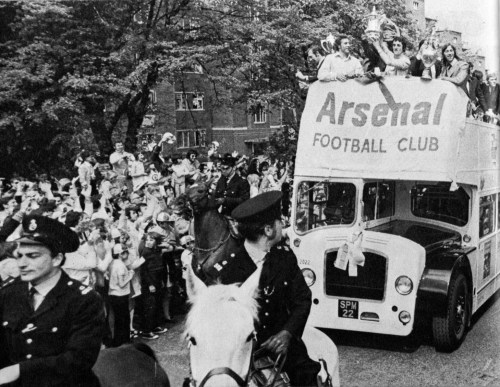 Today and tomorrow I will be posting scans of a booklet Arsenal published in the early 1970s for prospective youth players. Some of the apprentices featured in the booklet would go on to become extremely well known. 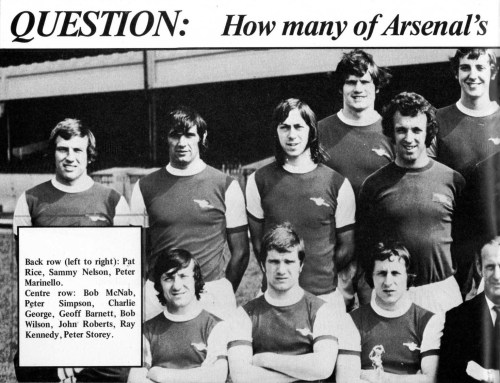 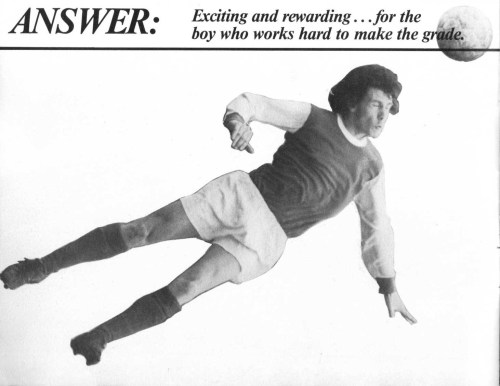 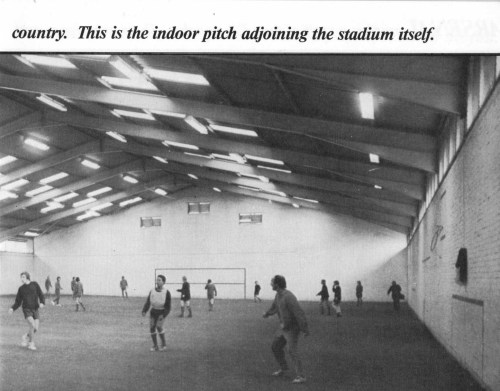 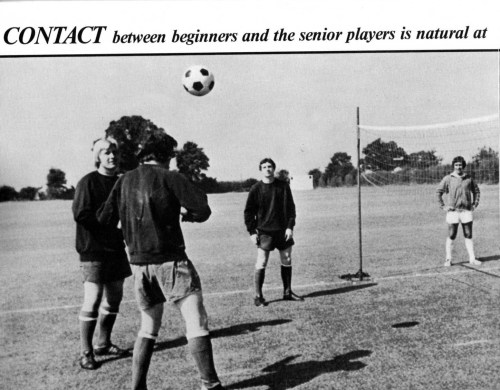 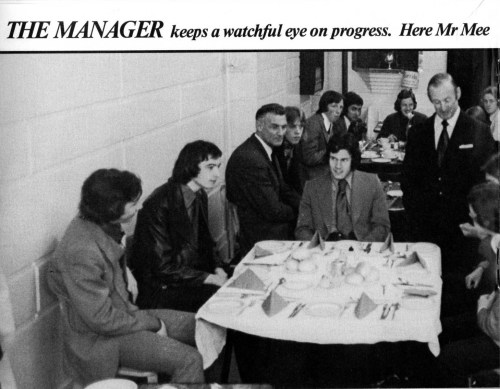 On April 1st 1972 Arsenal were due to play Nottingham Forest at home. Forest had been a poor side for a few years, but this season they were particularly dire, and bound for relegation.

Now although Arsenal had been experiencing an up and down post-double season this was a real home banker, and the game that my father had decided would be the right time to finally relent to my weekly pleas of “When can I go to Highbury?” I wonder if my Ma had the slightest inkling as she saw us off on our special outing that it would end up an almost weekly occurrence?

We drove part of the way (I’m not altogether sure where we were living at the time to be honest because we moved a lot when I was a kid) and then got on the tube. I was getting more and more exited as the train was filling up with fans. What a mixture! From an old man with a hat covered in badges to the noisy young bucks with their scarves. I even saw my first butchers’ coat on that train (for those that don’t know there was a brief craze for fans wearing white butchers’ coats covered in graffiti to football matches).

I was also incredibly impressed when my Dad told me that we were getting off at Arsenal station. Wow, my club has even got its own tube station! (Rather embarrassingly I remember looking at the stations on the tube line and thinking that we had one but Leeds didn’t – but then again what does a four-year-old know of geography?).

It was still early but there was a bit of a crush getting out of the dark station, and then suddenly we were out in the daylight and my eyes and ears were assaulted by a riot of colour and noise. I’d never seen anything like it. And there, framed in the image, was a corner of Highbury. I could actually see it with my own eyes! All these years later it sounds corny and was probably because I’d spent so long wanting to go there but it just felt so right. Despite the crowds around the ground and the noise I knew I was safe; I knew I was home.

We walked along Gillespie Road and I was just totally awe struck. It was absolutely amazing. There were people everywhere – and they all seemed to be Arsenal fans; I never realised there were so many of us. There were people walking along laughing and joking, some talking seriously, others walking along drinking and still more buying scarves and stuff. And lots of swearing, which did shock me for a while because I’d never really heard much swearing apart from Ma occasionally saying ‘Balls’ when something went wrong!

Next we turned into Avenell Road and went up to the main entrance to collect our tickets. It was just so beautiful, even having a fully uniformed commissionaire on the door, (who called my Dad Sir!). He opened the door and my Dad walked straight in but I must have been slightly intimidated because I just stood there for a second until the commissionaire smiled and asked if I was going in. “Yes please!” and then into the Marble Halls with Herbert Chapman’s bust in front of us. Just how impressive could this place get?

We collected the tickets from the box office counter in there and then Dad decided I needed a scarf, which we bought from someone more or less opposite the entrance. Whilst that was being bought I was just staring at the East Stand’s façade (I still get a buzz looking at it 40 years later). It’s just such a one off; to me it looks like it should be part of a museum or some such lauded building. The only thing wrong with it is the row of houses opposite which makes it difficult to get back far enough to take a really good photo!

Even my Dad was exited now, I could tell. He’d given up going to matches when he got married, so it was the first match he’d been to for a few years. We walked up the hill and round the Clock End to get to our entrance in the West Stand lower. To me it was like the greatest, plushest theatre in the land, although in reality it was a bit grotty down there. Not to me though – this was Highbury; this was my new home.

We were virtually at the front of the seats and watching the players running past just yards away from me was amazing. But what caught my attention most were the terraces at each end of the ground. These swaying, rolling walls of supporters and their noise enthralled me completely. Even then I realised that was where I wanted to be, and ironically the scarf I’d been bought had Arsenal on one side and North Bank on the other. Fate. There was something to celebrate that day as well, a comfortable win for Arsenal. Not a bad start at all…but one thing that had long puzzled me was why I thought that Peter Marinello was a wonderful footballer. On reading his autobiography he had that match down as his best performance for The Arsenal so mystery solved.

Now being with a four-year-old my Father wanted to avoid getting caught up in the crush at the end with the obvious risk of us being separated. Fortunately though, his method of avoiding the crush wasn’t to leave five minutes early, it was to sit there for ten minutes after the match ended! A much better idea I’m sure you’ll agree, and to this day I’ve never left a game early. We sat there watching the ground empty out and it got to me how quickly the stadium did actually empty, especially the terraces. Despite waiting a while there was still a massive queue to get into Arsenal station so we strolled down to Finsbury Park and got the tube from there.

On the way home I read the programme so many times I probably even knew the printers name and address off by heart! Thinking back I must have spent the rest of the weekend boring my Ma rigid with tales of Highbury and my adventure.
That trip, which was meant to be a one off treat, became a more and more regular occurrence over the next few years until just over five years later my Dad happily showed me what had come in the post that day – a pair of season tickets for the East Stand. And all these years (and season tickets) later my Ma still doesn’t understand why I don’t just watch the game on TV! 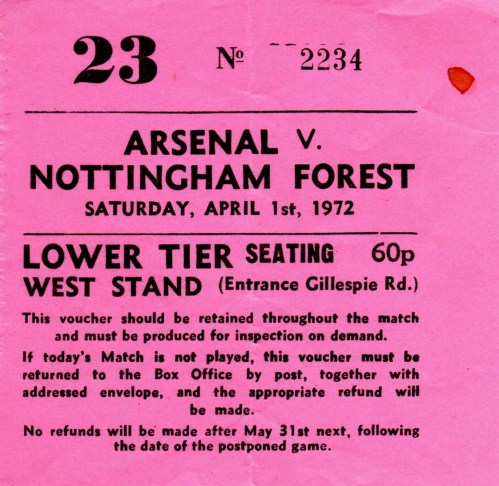 There’s an old line about gentlemen excusing their purchase of top shelf magazines by saying they were only buying them for the articles.

Maybe there is some truth in that, and so today’s scans are two articles from Parade in 1971. Also, as the second article features Bob McNab, I’ve added a later press photo from his appearance in ‘On the Buses’. 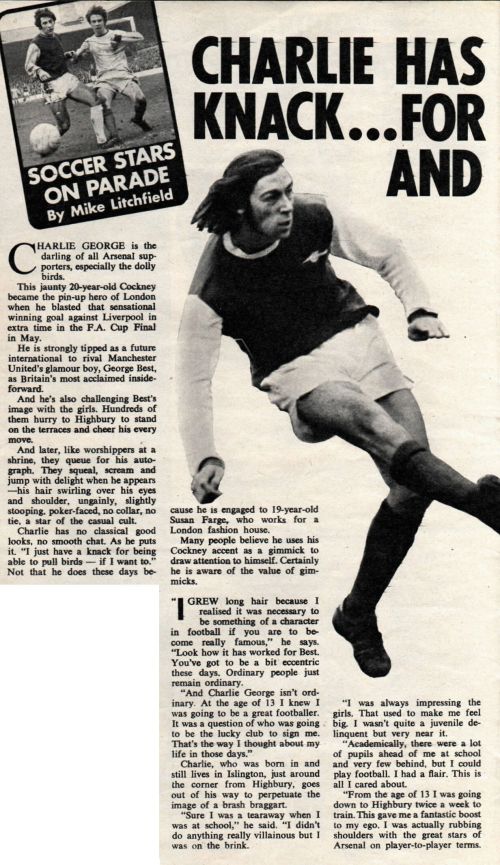 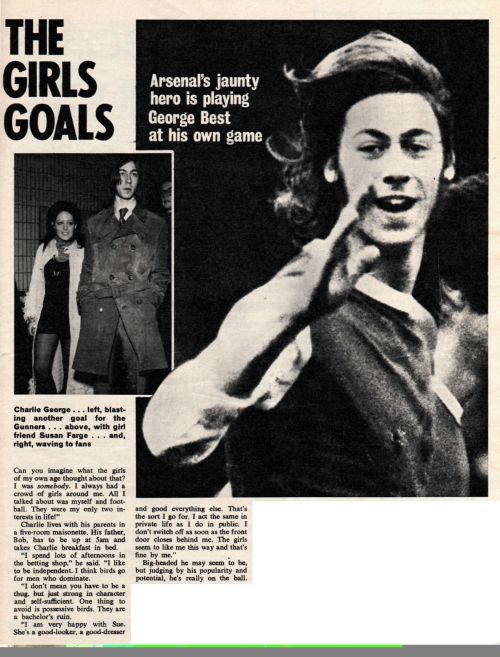 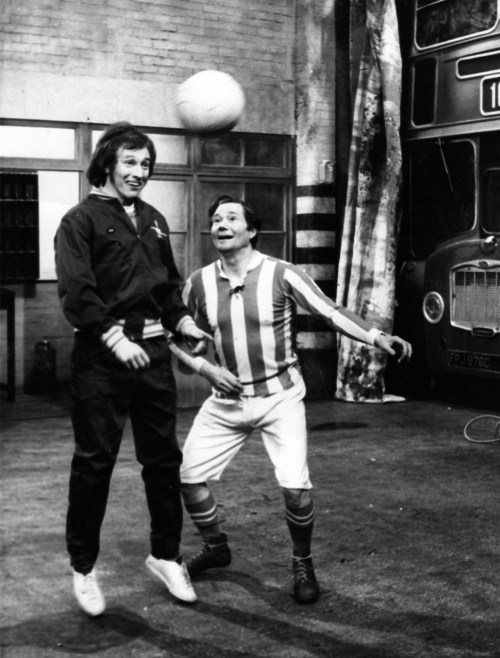 “Bob McNab Turns Actor.
Arsenal football star Bob McNab, pictured here is a track suit, has taken time out to make his acting debut. Bob appeared in an episode of the TV comedy series “On The Buses”, as the star performer in the bus depot football team. Bob is rehearsing with star of the show, comedian Reg Varney, who plays Stan the bus driver – and obviously prefers knee-length “shorts”.
6th march 1973.”

Today some scans of press photo’s from the 1971 double. Strangely none have backslips but I think they’re pretty self explanatory. 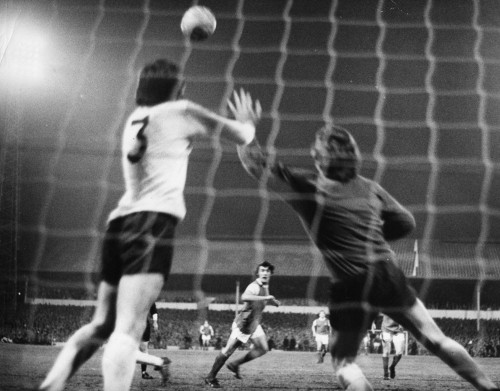 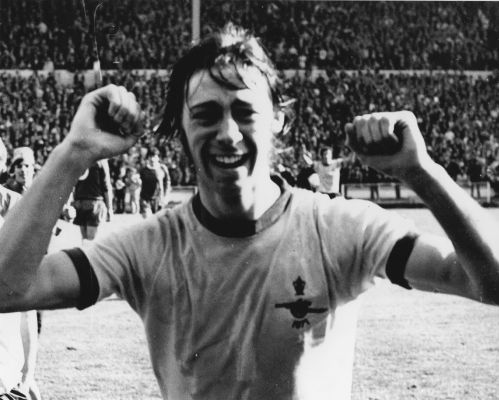 In the days when player’s wages seemed far more realistic it was common for the players of teams getting to the Cup Final to issue something to earn them a bit more money. To put it into context Bob Wilson told me he earned around £17,000 for the double season, although he did point out he bought a house for £26,500 around then.

In 1971 the players got some extra from a booklet called ‘Inside the Gunners’, and today’s scans are some of the pages from that booklet, including a player’s wives and girlfriends page. 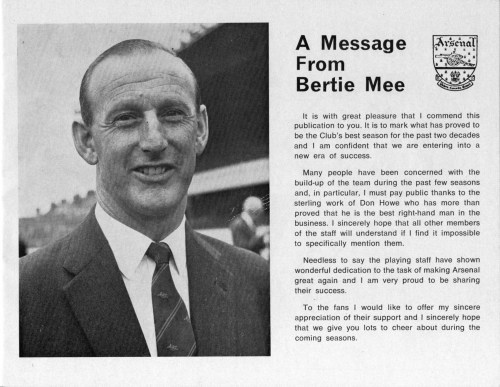 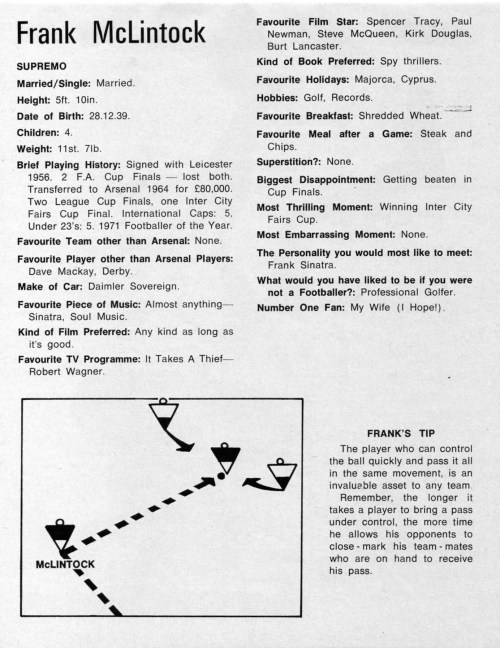 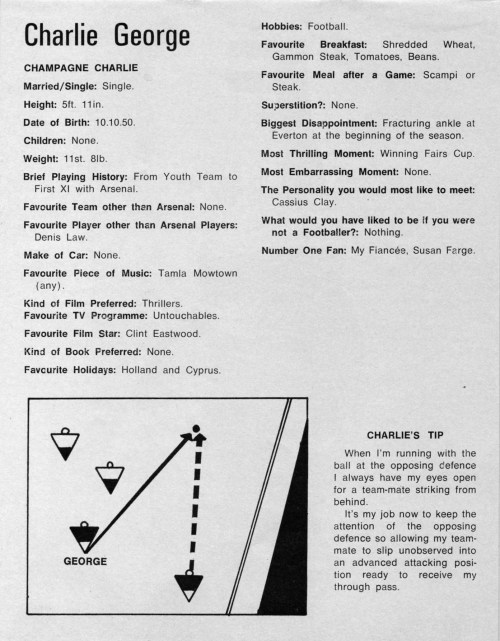 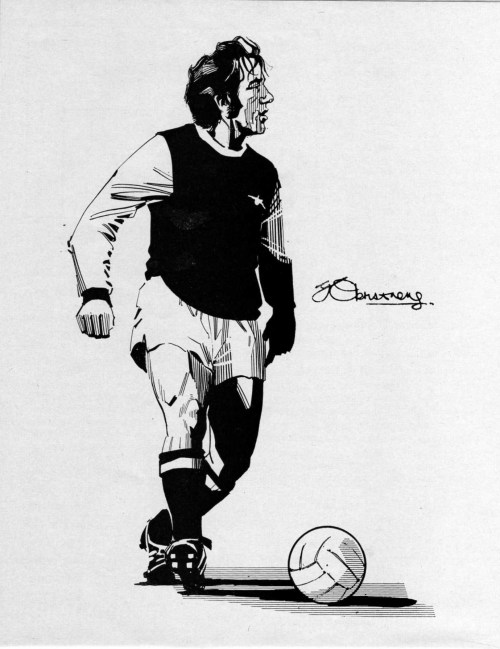 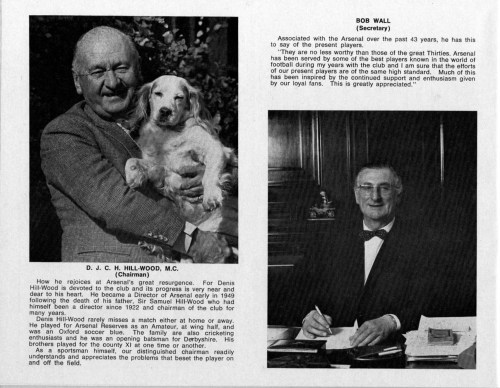 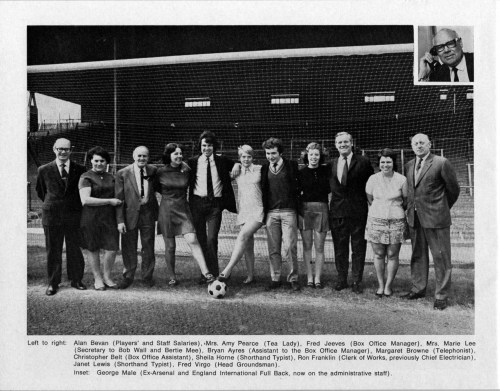 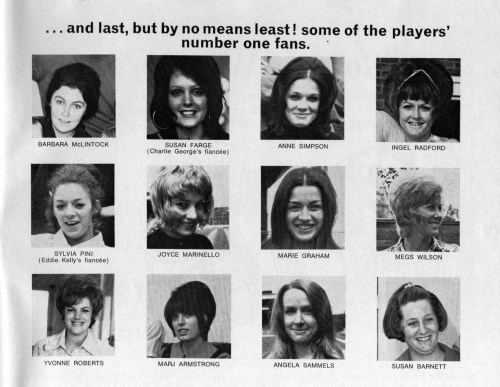 The Fairs Cup (or Inter-Cities Fairs Cup to give it it’s full title) was a tournament born in the 1950s to promote cities holding trade fairs. Rules of entry changed over the years from the original one city one team rule and it morphed into what is now the Europa League via the UEFA Cup.
After not lifting a trophy since 1953 though it could have been the World Cup the way the victory was treated on the night at Highbury, a 3-0 win overturning a 1-3 first leg defeat, and on a personal note for Frank McLintock he finally had a winners’ medal after 5 losing finals.

First scan is a great press photo from the semi, followed by the large postcard sized teamgroup card issued by the club (front and back). The rest are press photo’s of both the Fairs Cup final, and later European matches under Bertie. Where there is one backslips are copied below.

“The Flying Englishman!
April 8th 1970.
Dutchmen encountered a flying Englishman at London’s Arsenal Stadium tonight (Wednesday) during the European fairs Cup, semi-final first leg between Arsenal and Ajax of Amsterdam.
Arsenal player, Graham flies through the air, and seemingly pushes Ajax keeper Gerrit Bals in the chest, as he attempts to clear the ball. Looking on at the left is Ajax player Rudi Surrendonk.” 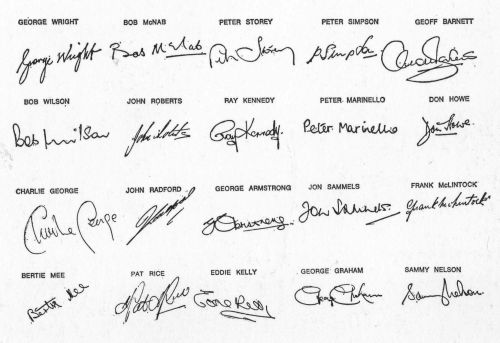 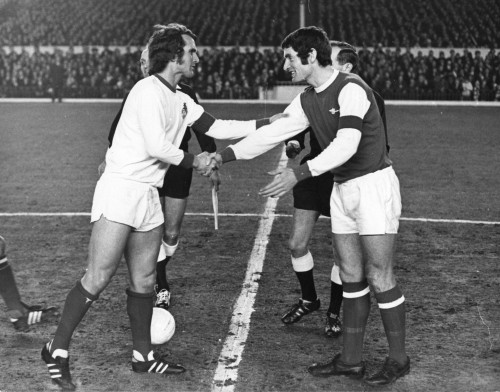 A few random press photo scans before we get to the 1970s. As usual the script underneath is from the backslips.

“Baker’s Goal Attempt Foiled:
The ball gets fouled up in the legs of Bolton Wanderers’ goalkeeper Hopkinson as he tangles with Arsenal centre-forward Baker as he tried to shoot for goal during the match here today. Looking on (centre backgroound) is Arsenal inside-left Eastham.
September 7th 1963.”

“Arsenal end Leeds Title Dream 8.5.68.
The last flames of Leeds’ great dream of multi-success this seasonwere finally stamped out by an avenging Arsenal in the last minute of a feverish battle.
In a game in which the tempers and the drama ran overpoweringly high it was Leeds who were going strongest for the winner as balance trembled at 3-3.
Then Arsenal broke away and inside right George Johnston somehow crashed through three tackles in the penalty area to score the winner.
From Highbury’s point of view there could not have been more acceptable victims. It was Leeds who grimly beat Arsenal in the League Cup Final in March. It was Leeds who had never been beaten by Arsenal in the years since the Yorkshire club returned to Division One.
Photo shows: Gould lunges but it was Leeds centre half Madeley who put Arsenal’s first goal into the net. Gould connected later in the game – with the ball for the third goal and with Leeds Goalkeeper Harvey to earn a booking from FA Cup Final referee Leo Callaghan.”

“Goal number 3 for Arsenal.
Derby County centre-half Roy McFarland slides to the ground as Arsenal forward Jon Sammels races by to score Arsenal’s third goal in the match at Highbury this afternoon.
8.11.69.”

A couple of late ’60s teamgroups, with the team on the verge of winning trophies for the club again.

In the summer of 1966 there was a football tournament played in England, but the real sporting event (certainly as far as this blog is concerned!) was at Highbury where Muhammad Ali defeated Henry Cooper in a world title bout, or as some called it the second battle of Highbury.

The first scan is a press photo of the ground filling up pre-match (no backslip) and the rest are from Boxing news.